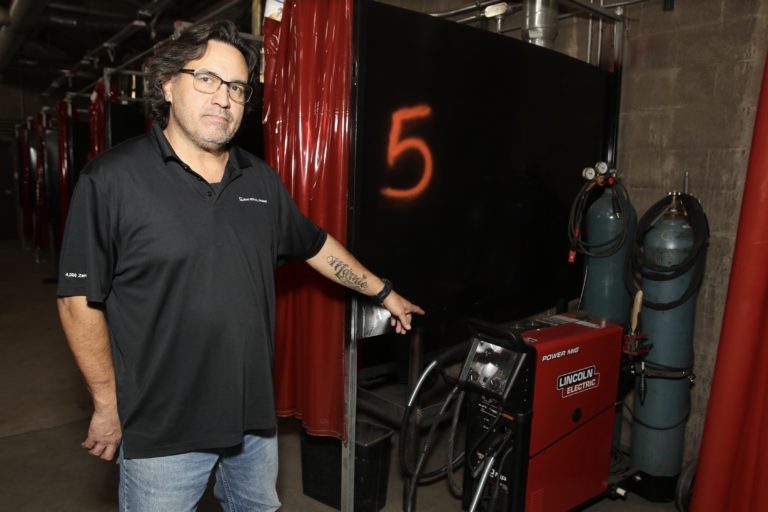 The Cobre Valley Institute of Technology has seen a renaissance in its welding program, which has come back and expanded thanks to the help of Freeport McMoRan and a pair of local men who’ve stepped up post-COVID and found a passion for teaching.

“We’re setting up a state-of-the-art welding shop that will be the envy of welding programs across the state,” says CVIT Superintendent Mike O’Neal. “We’re just thankful that Freeport allowed these guys to be the instructors, and everything just kind of fell in place.”

The new instructors are Ernie Baca and John Freeman, who both grew up in Miami and are training instructors for Freeport.  “Our supervisor, Kurt Knauss, heard they canceled all the welding classes and worked out a deal, with Freeport paying us to teach,” Freeman says. “I enjoyed what was going on, and the college was amenable to our approach to make it better.”  Knauss serves on the Gila County Community College Provisional District Governing Board and oversees the welder training program at Freeport McMoRan.

Prior to Freeport stepping in, the program foundered in the wake of COVID, and CVIT struggled to find instructors for about a year. O’Neal says at one point, there were no hands-on welding classes, and all that was available were courses such as industrial safety, intro to machining, and other pieces of the curriculum.  “In spring 2021, we were at a point where we were not going to be able to continue our program,” O’Neal says. “We were going to have to shut it down because we just didn’t have an instructor. We were very fortunate that Freeport McMoRan stepped up to help.”

That’s when Baca and Freeman took over, and within a year the program came back and has been expanding ever since.  Initially, the pair were paid by Freeport and only taught a few classes during the week. But they both enjoyed it so much they accepted adjunct faculty positions in the fall of 2021. The classes were so popular CVIT added summer courses, which surprised everyone involved in the enterprise.

“Our kids just kind of took the ball and ran with it because these guys were doing a great job,” O’Neal says. “I had ten kids come to me who wanted to take summer welding classes, and that’s never been the case. We had kids just knocking down the door to take those courses.”

Now the program that was flagging a little more than a year ago is growing exponentially. The classes are currently limited to 12 students, but the seats are always filled with high school and college students as well as returning adult learners. Baca says they’re in the process of expanding capacity to 15, and they’re well on their way to equipping the classrooms to handle that goal.

“We had so much good input from the students, and they wanted us to teach in the summer, so we looked into expanding the program,” Baca says. “CVIT was very receptive to the idea, and we were happy for the support.”  According to O’Neal, CVIT has invested about $40,000 so far to equip and upgrade the Regional Training Center in Miami, a building owned by Freeport and utilized for classes.

Baca was a graphic designer before he began his 26-year career as a welder. He went into the construction business and picked up the welding bug as he traveled the country. Eventually, he returned to Miami, where he hired on with Freeport McMoRan in 2010. Since then, he’s raised five kids in his hometown. Baca says he is “past his prime” now and is content to pass his knowledge on to future generations.

“I was a very good TIG welder, but welding is not easy on your body,” he says. “I really enjoy being an instructor, because if one welder comes through here and says, ‘I paid my family’s way through life with skills you helped me learn,’ I feel I am succeeding and will feel good about this work.”

In addition to filling a Monday through Thursday evening schedule, CVIT has recruited Freeman to teach a full day on Fridays in order to give high school students from as far away as Ray an opportunity to participate.  “The interactions are something I really enjoy,” says Freeman. “It’s not a second income for me because I work a lot of overtime at Freeport and had to give that up to teach. But I get personal satisfaction teaching high school kids and adult learners.”

Most high school and college students enter the program with a goal of getting a job at the mines, following in their family’s footsteps, or otherwise advance industrial careers.  But others have different careers in mind.  “I want to work at Walt Disney Imagineering and get into a more creative career,” Khalib Cruzabo says. “I make models from scratch out of Styrofoam, but when I get my certification, I feel I can really go places.”

Adult learner Julie, who preferred not to share her last name, is participating because of her significant other.  “My honey is a welder, but he’s losing his sight,” she says. “He encouraged me to do it because he thought I would like it.”

Cobre Valley Institute of Technology programs are available to high school sophomores, juniors, and seniors at high schools throughout the Copper Corridor. Classes are also open to home-schooled or charter school students, as well as community college students and adult learners.

To see the original story published by the Globe Miami Times, click HERE