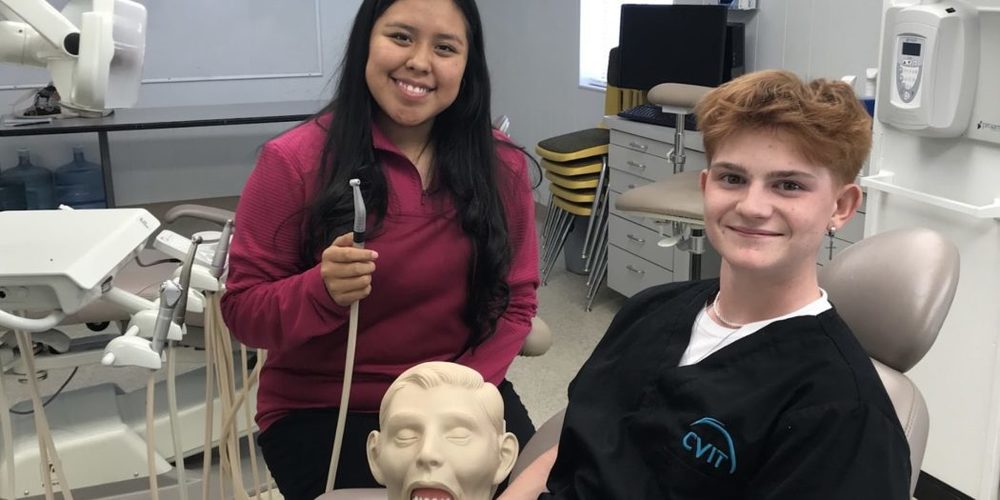 Due to the hands-on nature of its curriculum, the Cobre Valley Institute of Technology has gone through a period of readjustment in the wake of the COVID pandemic, but as a result the Dental Assistant program has emerged stronger and with a bright future on its horizon.

“When COVID hit that kind of squashed in-person instruction for a little bit,” says CVIT Superintendent Mike O’Neal. “The former instructor relocated out of state and we couldn’t find anybody to fill her spot, but she managed to finish the program through distance learning for a small group of students.”

While that group was able to finish, there were also a number of students caught in limbo halfway through the 2-year certification program and those entering faced an uncertain future.  That is when CVIT found Donna Nelson, a former dental assistant supervisor at the San Carlos Corporation with decades of experience in the field.  Nelson had ended her career after 35 years and was prepared to live the life of a full-time mom, but once she was bitten by the teaching bug, she became a full-time instructor instead.

CVIT reached out to her between semesters in the last scholastic year because a handful of students would not have been able to graduate in May without an instructor.  “I was home minding my own, doing my own thing and I started getting calls from people who knew me,” Nelson says. “If CVIT didn’t find an instructor, those students were not going to be able to graduate.”

In addition to her decades of experience in the field, Nelson has deep connections to the Globe-Miami-San Carlos communities.  She was raised and lives in San Carlos—her father is a member of a Pueblo Tribe near Albuquerque, New Mexico—and she graduated from Globe High School.

In a hometown twist though, it turns out Superintendent O’Neal played football with her husband John Nelson and coached her son, John Nelson Jr.  “We didn’t know this until she got hired full time,” O’Neal says. “Here we are trying to make a difference in students’ lives and it’s just a neat thing. It’s kind of funny how there’s a connection somehow when you live in a small town.”

Although she had never worked as a teacher, her work experience supervising dental assistants was sufficient qualification for the position. Nelson took over the program part-time in January and was so successful she was offered a full-time position, which she happily accepted. She is now almost halfway through her first full year as an instructor and both CVIT and her students are impressed with the results.

GHS alumna and CVIT graduate Samantha Dunmire was one of the students stuck in limbo before Nelson came along. She believes the new instructor’s real-world experience prepared her for life in a dental office and contributed to her ability to land a job.  “There was a big, big gap between our first and second semester,” Dunmire says. “Our third semester, we didn’t actually have an instructor, but in our fourth semester Donna stepped in.”  Dunmire was attending the program as she was finishing the final two years of high school and was eventually able to get her diploma and her Dental Assistant certificate in May.  By July 11, she had found a job as a pediatric dental assistant at offices in Gilbert and Chandler and she now lives in Mesa.

“She believed that hands-on learning was the best way to learn because dentistry is such a hands-on job,” Dunmire says. “We were in the lab almost every single day preparing after being really far behind due to the circumstances. She jumped right into teaching us the basics we needed to get right into a career.”  She believes Nelson has breathed new life into the program due to her real-world experience.

Current student Jazmine Palmer is a senior at San Carlos High School and this is her first semester in CVIT. She originally planned to attend the Northern Arizona University dental program, but CVIT went to her school with a presentation so she decided to stay closer to home for the two-year program.  The program has expanded her knowledge of teeth and dental health. She says she wants to learn more so she can help people.

“We’ve mainly been doing bookwork at this point, but I’m looking forward to getting practical experience,” Palmer says. “I’ll graduate from this program at the same time I graduate from high school and then I plan on either moving to the Valley or going to NAU for their program.”  Miami High School junior William Hickey says he is in the program to prepare himself for orthodontics school. He wants to find out if he likes dental health and if it is in his future.  “Having his certificate will give me something to fall back on while I consider what’s next,” he says. “I really like the way Ms. Nelson teaches and I think this program is unique.”

O’Neal is grateful to have an instructor with so much experience and deep community connections to help CVIT recover from the ravages of the COVID shut-down that affected schools and technical education programs throughout the state as well as the rest of the country.  Nelson is not only teaching high school aged youths, but is also adult learners after that program was put on pause for a year.

“I guess you could say she was kind of bitten by the education bug,” O’Neal says. “Not only does she bring a wealth of experience, but she’s from the community. I think our students identify with her as a member of the community, and they can see themselves in her. It’s been a win-win for us.”

Nelson was nervous about teaching at first, but decided to take a supervisory approach to learning and graded students the way she would evaluate employees in her former career.  “The best part is how eager they are to learn,” Nelson says. “It’s been over a year now and we’ve seen the program’s potential. I plan to be here for the long-haul.”

Students who successfully complete the program will receive a Dental Assistant National Board (DANB) certification, which gives them an added edge in the job market.  The program provides students with the training to deliver quality oral healthcare and includes X-ray imaging and clinical skills.

To see the original article published in the Globe Miami Times, click HERE